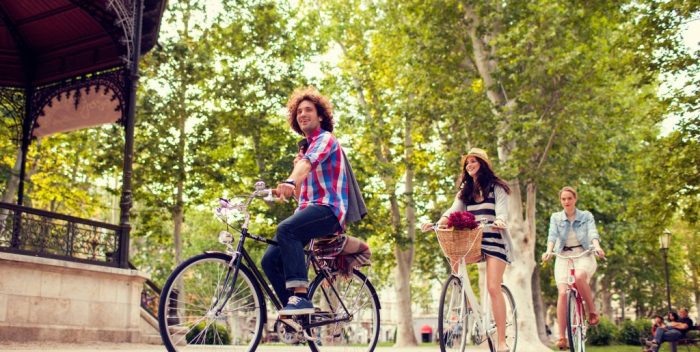 Even though my favourite way of transport here in Croatia are trams, I have to confess that I feel envy of those who have bikes. Zagreb is the perfect city for them. Almost all streets are available for bicycles, and sometimes even their rail is bigger than the pedestrian one. I have to say that I still don´t manage to walk always in my part of the street and that I force bicyclists to dodge me more times than I want.

But the good thing is that they are used to bad citizens that don ́t respect the yellow lines on the ground so they don ́t get mad or turn around to put me a bad face.

If I would have a bike I would for sure buy a bell to make them go away from my way, but I think this is also because I´m not that good at riding bikes and I would have more than an accident.

But in general, and in Zagreb, where the land is plain, there are more parked bikes than cars. And they are not allowed to enter trams I think because like me, people that the reason why people go on trams is due to the fact that they don´t have the enough energy, time or skills to go and get a bike. And this is the best way of making them less jealous of going slower than people that go by two wheels, so they just don´t allow bicycles inside trams.

Another point that I like about bicycles in Zagreb is that you can name them. If you have a bike is like you have a child for a short period of time (in our case that we will be living here less than a year). There are also plenty of associations where you can go and fix your bike, because these children give a lot of work. So every Thursday, I have one or more friends that are busy repairing some broken part of their loved ones.

But definitively I would change trams for a bike with a bell and I would go every Thursday to change a piece, fix a pedal or buy a bigger bell (seriously, I would need the loudest one).