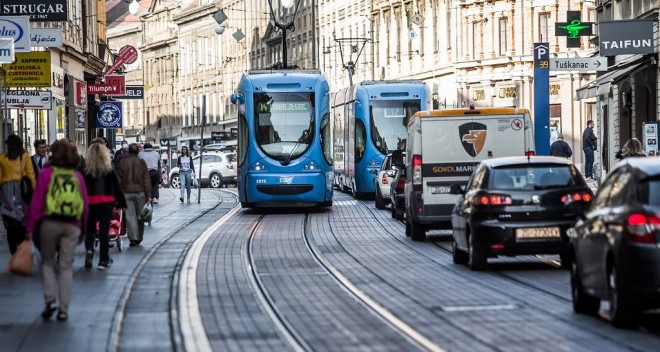 I entered Zagreb knowing just the basic things: the history of the Balkan’s War, how far away from my home was the train station, how low the temperatures are during the winter, the address of my new apartment and that seven Croatian Kunas equals more less one euro. From there, every single thing inside Zagreb and Koprivnica was new to me. As soon as I went out of the airport, I started learning things. I remember the thing that first impressed me on my way from the airport to my home, were the trams. In twenty minutes I saw five different types of them: some small ones, some modern, some of them that even start moving while people were still going up the stairs, some old ones full of paintings on the outside and some big ones.

What more striked me was that cars and they share railways. It’s not exactly that they share them. Rather, is cars circulate by the trams railways like if it’s their own rail. Even today I still find funny watching cars and trams in the same part of the road. It seems to me like the tram is some kind of big animal trying to get the small car, which is like if it’s its meal. Like a shark chasing a small fish. In Madrid we don’t have trams, instead we have subway. I know that in Zagreb they don’t have subway because underneath the ground is all full of water, so it wouldn’t work. What we have in common Madrid and Zagreb are the buses. Even so, I prefer trams because they have more space, they are faster and they never get involve in traffic jams. I wish that in Madrid we would have trams. I love sitting down and watching the city from them, getting lost (the first weeks I didn’t like this part that much because I wasn’t getting lost on purpose), watching them getting empty every time they arrive at the main square and opening the windows in the old ones while I just stare at the city. I don’t know if in Madrid they would put trams even if the bottom part of the city would be full of water (like it happens in Zagreb). Madrid is a really big and crazy city and I think that trams would skip the part of chasing the small fishes and would just eat the cars making an everyday chaos. I will just enjoy my last months here taking trams while I still can.